The man who should have been my father was killed in a Burmese prisoner of war camp 9 years before my conception.

I would never have been born had it not been for our current Queen, Queen Elizabeth the second, having her coronation day on such a lovely warm July day. This was a cause of great celebration in the village, everyone who could went along, of course much wine and beer and food as could be scraped together was available and free. This was to have a profound effect on my conception.

The man who became my father was having a wonderful day, he had consumed quite a large quantity of alcohol, and felt the need to relax and recover his strength in order to continue the celebrations into the evening. Thusly, he felt it a good idea to make use of a haystack nearby for a couple of hours of sleep. Heading there, he climbed carefully into a haystack which, to his delight, contained the woman about to become my mother.

Did they enjoy themselves? According to my mother she had no memory of the event. However, the deed was done and nine months later, into the world I came! My brother was less than impressed, he had had 13 years of being an only child, suddenly there was a little brother that he didn’t ask for and definitely didn’t want! So from that day forward he basically ignored me as much as possible and I, after being rebuffed a few times, gave in and stopped pestering him.

My first five years were relatively happy. My mother had to work to keep us in food and comfort so I was brought up mostly by my grandmother, a wonderful old lady who did as good a job as she possibly could and taught me so very much about life. We lived in a wooden house by the side of a river and with a huge garden, unfortunately full of nettles which I had a tendency to fall into from time to time. An apple tree to climb, a well in the garden, and a lovely corrugated iron roof which require painting with Red Lead once a year, a job I thoroughly enjoyed helping with as it meant that I was up off the ground and away from the curse of the world.

At five I went to school. My primary school in the village of Bramley was a place of wonder to me, it had books and I knew how to read! That was my introduction to the written word, something I have loved ever since. I was bright, happy, and according to the teachers, intelligent. This meant I had “a future”. That was something highly sought after in those days!

I sailed through my early years at school until the 11+ exam decided that I was good enough to go to high school. High school didn’t turn out quite the way I expected it to. I was a reasonably “pretty” child, at least to the headmaster of my School! Things took a turn for the worst after my mother decided I might enjoy the schools “summer camp”, run by said Headmaster. And I did, at least at first. Then one evening said headmaster offered me and a few other pretty lads the opportunity to share his tent for the night. I saw no reason at that time why I should not but the following mornings early light saw me walking somewhat oddly. That was the last time I fell for that trick.

And so, since from that day onwards he frequently called me to his study for “punishment”, punishment being an excuse to lay me over his knee and continue his perverted pleasure, I soon felt it a good idea not to go to school there anymore. Of course, in those days nobody wanted to believe the child, preferring to take the word of an adult. Luckily, a few years later, someone who was suffering the same fate as myself, was indeed listened to, and the gentleman was let go with a golden handshake.

I, on the other hand, moved on to a beautiful school in Winchester. A progressive school, a school where the children were encouraged to take an interest in their own education rather than having a curriculum thrust down their throats. I loved it! My education took off in a new and better direction, I found the stage, I found music, and therefore naturally, I became an electrician! Only briefly I hasten to add. After leaving school with those qualifications I deserved I began work but the journey from my home in Bramley to the cinema in Winchester where I was employed, was far too far and far too long.

Short of work and short of money, I decided to look for something nearer home. As my mother was already working at the mental hospital in Basingstoke, I had an easy opportunity to find something suitable there. I popped along and asked if they had any need of someone with my little experience and minimal training, and they said, “If you have any idea how to program these machines which have been installed here in the laundry and make them work, then yes, you’ve got the job”. After a quick look at the controls I decided that, yes, I could indeed make them work and so I joined my mother and unknowingly, my soon-to-be wife.

Meeting Sheila one Saturday lunchtime in Basingstoke, I found her melancholy and feeling lonely. Having been brought up to care about other people as well as myself, I asked how she was. She informed me that her “boyfriend” had just dumped her and she was going for a walk round the town before catching her bus home. I offered to accompany her on her perambulation, ending up in WHSmith’s looking through the record collections. Finding a soundtrack album for the current bond film, On Her Majesty’s Secret Service,  and fully expecting a laughing rejection, I bit the bullet and ask her would she like to accompany me to see the film on the following Saturday. Much to my amazement, she accepted.

Our time together from that fateful day, 28th Feb 1970 continues in the Our Life page. After leaving school 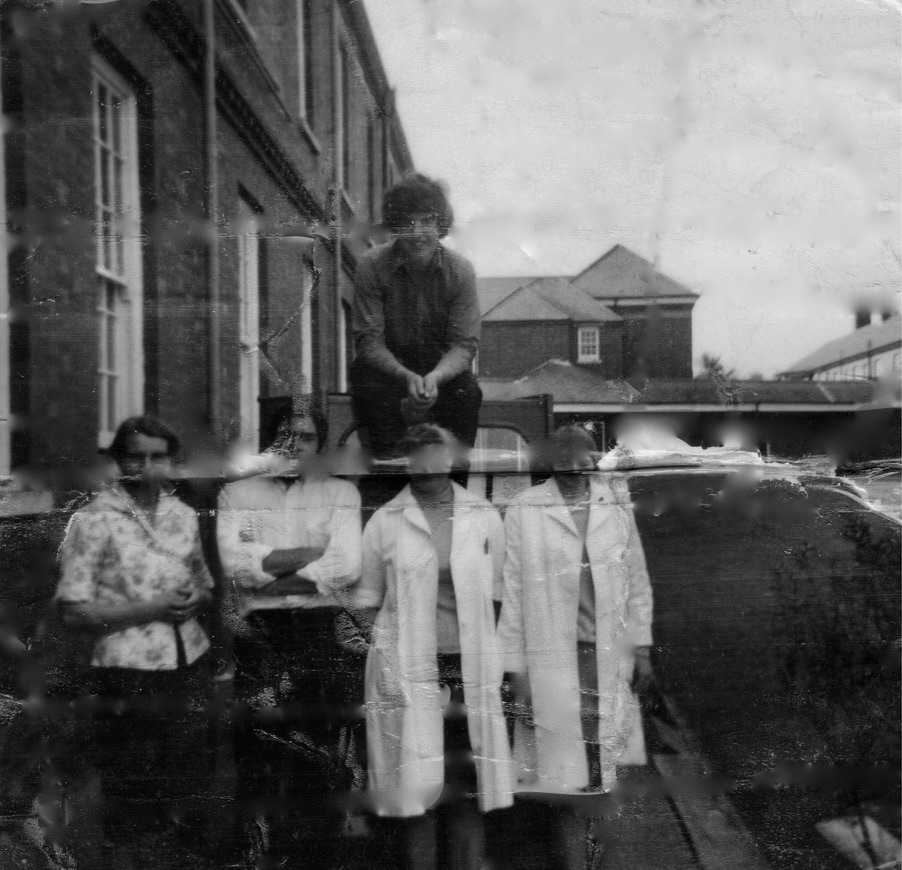 A very poor quality picture taken in 1971 featuring, from L to R.

Phoebe (My Mother), David, Me (atop the electric truck), Freda and Sheila.